Keratitis is an inflammation of the cornea, the transparent membrane that covers the colored partof the eye (iris) and pupil of the eye.

There are many types and causes of keratitis. Keratitis occurs in both children and adults.Organisms cannot generally invade an intact, healthy cornea. However, certain conditions canallow an infection to occur. For example, a scratch can leave the cornea open to infection. A verydry eye can also decrease the cornea's protective mechanisms.
Risk factors that increase the likelihood of developing this condition include:
Some common types of keratitis are listed below, however there are many other forms

A major cause of adult eye disease, herpes simplex keratitis may lead to:
This infection generally begins with inflammation of the membrane lining the eyelid (conjunctiva)and the portion of the eyeball that comes into contact with it. It usually occurs in one eye.Subsequent infections are characterized by a pattern of lesions that resemble the veins of a leaf.These infections are called dendritic keratitis and aid in the diagnosis.
Recurrences may be brought on by stress, fatigue, or ultraviolet light (UV) exposure (e.g., skiingor boating increase the exposure of the eye to sunlight; the sunlight reflects off of the surfaces).Repeated episodes of dendritic keratitis can cause sores, permanent scarring, and numbness ofthe cornea.
Recurrent dendritic keratitis is often followed by disciform keratitis. This condition ischaracterized by clouding and deep, disc-shaped swelling of the cornea and by inflammation ofthe iris.
It is very important not to use topical corticosteroids with herpes simplex keratitis as it canmake it much worse, possibly leading to blindness. 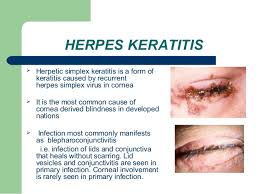 People who have bacterial keratitis wake up with their eyelids stuck together. There can bepain, sensitivity to light, redness, tearing, and a decrease in vision. This condition, which isusually aggressive, can be caused by wearing soft contact lenses overnight. One study foundthat overnight wear can increase risk by 10-15 times more than if wearing daily wear contactlenses. Improper lens care is also a factor. Contaminated makeup can also contain bacteria.
Bacterial keratitis makes the cornea cloudy. It may also cause abscesses to develop in thestroma, which is located beneath the outer layer of the cornea.

Usually a consequence of injuring the cornea in a farm-like setting or in a place where plantmaterial is present, fungal keratitis often develops slowly. This condition:

Peripheral ulcerative keratitis is also called marginal keratolysis or peripheral rheumatoidulceration. This condition is often associated with active or chronic:

Often associated with the type of viruses that cause upper respiratory infection (adenoviruses),superficial punctate keratitis is characterized by destruction of pinpoint areas in the outer layer ofthe cornea (epithelium). One or both eyes may be affected.

This pus-producing condition is very painful. It is a common source of infection in people whowear soft or rigid contact lenses. It can be found in tap water, soil, and swimming pools.

Photokeratitis or snowblindness is caused by excess exposure to UV light. This can occur withsunlight, suntanning lamps, or a welding arc. It is called snowblindness because the sunlight isreflected off of the snow. It therefore can occur in water sports as well, because of the reflectionof light off of the water. It is very painful and may occur several hours after exposure. It may lastone to two days.

In summary, keratitis can be caused by:
Symptoms of keratitis include, but are not limited to:

A case history will be taken and the vision will be tested. Examination with a slit lamp, aninstrument that's a microscope and focuses a beam of light on the eye is important fordiagnosis. The cornea can be examined with fluorescein, a yellow dye which will highlightdefects in the cornea. Deeper layers of the cornea can also be examined with the slit lamp.Infiltrates, hazy looking areas in the cornea, can be seen by the doctor and will aid in thediagnosis. Samples of infectious matter removed from the eye will be sent for laboratoryanalysis.

Keratitis is an inflammation of the cornea — the clear, dome-shaped tissue on the front of your eye that covers the pupil and iris. Keratitis is sometimes caused by an infection involving bacteria, viruses, fungi or parasites. Noninfectious keratitis can be caused by a minor injury, wearing your contact lenses too long or other noninfectious diseases.

If you have eye redness or other symptoms of keratitis, make an appointment to see your doctor. With prompt attention, mild to moderate cases of keratitis can usually be effectively treated without loss of vision. If left untreated, or if an infection is severe, keratitis can lead to serious complications that may permanently damage your vision.

Signs and symptoms of keratitis include:

If you notice any of the signs or symptoms of keratitis, make an appointment to see your doctor right away. Delays in diagnosis and treatment of keratitis can lead to serious complications, including vision loss.

Keratitis is the medical term for inflammation of the cornea. The cornea is the dome-shaped window in the front of the eye. When looking at a person's eye, one can see the iris and pupil through the normally clear cornea. The cornea bends light rays as a result of its curved shape and accounts for approximately two-thirds of the eye's total optical power, with thelens of the eye contributing the remaining one-third. Only the very thin tear film lies between the front of the cornea and our environment.

The cornea is about 0.5 millimeter thick. The back of the cornea is bathed in the aqueous fluid that fills the anterior chamber of the eye. The cornea has a diameter of about 13 millimeters (½ inch) and, together with the sclera (the white part of the eye) forms the entire outer coat of the eye.

What are the causes of keratitis?

Keratitis, the eye condition in which the cornea becomes inflamed, has many potential causes. Various types of infections, dry eyes, injury, and a large variety of underlying medical diseases may all lead to keratitis. Some cases of keratitis result from unknown factors.

What are the different types of keratitis?

·         Keratitis can be classified by its location, severity, and cause.

Keratitis may be acute or chronic. It may occur only once or twice in an eye or be recurrent. It may be limited in its effects on the eye or be progressive in its damage.

The various causes of keratitis may result in different clinical presentations, so defining the location, severity, and frequency of the condition can often assist in pinpointing the exact cause. Other helpful facts in establishing the cause of keratitis can include demographic information such as the age, sex, and geographic location of the patient. A medical history is often useful as well in finding the cause of keratitis.

Infection is the most frequent cause of keratitis. Bacteria, viruses, fungi, and parasitic organisms may all infect the cornea, causing infectious or microbial keratitis.

Physical or chemical trauma is a frequent cause of keratitis. The injury may become secondarily infected or remain noninfectious. Retained corneal foreign bodies are frequent sources of keratitis. Ultraviolet light from sunlight (snow blindness), a tanning light or a welder's arc, contact-lens overwear, and chemical agents, either in liquid form splashed into the eye or in gases in the form of fumes can all result in noninfectious keratitis. Chemical injury or contact lens-related keratitis often causes superficial punctate keratitis, in which the examiner notices myriads of injured surface cells on the affected cornea.

Allergies to airborne pollens or bacterial toxins in the tears may also cause a noninfectious type of keratitis. Autoimmune diseases create a similar appearance, often affecting the periphery of the cornea, termed marginal keratitis or limbic keratitis.  What are the risk factors for keratitis?

Major risk factors for the development of keratitis include any break or disruption of the surface layer (epithelium) of the cornea.

The use of contact lenses increases the risk of developing keratitis, especially if hygiene is poor, improper solutions are used to store and clean the lenses, or if contact lenses are worn improperly or in the presence of persistent irritation.

A decrease in the quality or quantity of tears predisposes the eye to the development of keratitis.

Disturbances of immune function through diseases such as AIDS or the use of medications such as corticosteroids or chemotherapy also increase the risk of developing keratitis.

What are keratitis symptoms and signs?

The symptoms of keratitis usually include pain, tearing, redness, and blurring of vision. The pain may be mild to severe, depending on the cause and extent of the inflammation. Sensitivity to light may also be present. To the observer, the eye may appear red and watery; and if the cornea has extensive keratitis, the normally clear cornea may look gray or have white to gray areas.

How is keratitis diagnosed?

The diagnosis of keratitis is made by an ophthalmologist (a physician who specializes in diseases and surgery of the eye) through a history and a physical examination. The history consists of questions documenting a past medical and ocular history and the symptoms specific to the current visit. The eye examination will consist of checking your vision and careful inspection of the corneas using a slit lamp, which is a microscope with excellent illumination and magnification to view the ocular surface and the cornea in detail. Special dye in the form of eyedrops may be placed in the eyes to assist with the examination.

In cases in which infection is suspected, a culture may be taken from the surface of the eye for specific identification of the bacteria, virus, fungus, or parasite causing the keratitis. Blood tests may also be done in certain patients with suspected underlying disease. Antibiotics, antifungals, and antiviral medication will be used to treat the appropriate organism.Broad spectrum antibiotics will be used immediately, but once the lab analysis determines theoffending organism, the medication may be changed. Sometimes more than one medication isnecessary. It depends upon the infection, but the patient should be clear on how often and howto use the medications.
A sterile, cotton-tipped applicator may be used to gently remove infected tissue and allow theeye to heal more rapidly. Laser surgery is sometimes performed to destroy unhealthy cells, andsome severe infections require corneal transplants.
Antifungal, antibiotic, or antiviral eyedrops or ointments are usually prescribed to cure keratitis,but they should be used only by patients under a doctor's care. Inappropriate prescriptions orover-the-counter preparations can make symptoms more severe and cause tissue deterioration.Topical corticosteroids can cause great harm to the cornea in patient's with herpes simplexkeratitis.
A patient with keratitis may wear a patch to protect the healing eye from bright light, foreignobjects, the lid rubbing against the cornea, and other irritants. Sometimes a patch can make itworse, so again, the patient must discuss with the doctor whether or not a patch is necessary.The patient will probably return every day to the eye doctor to check on the progress.
Although early detection and treatment can cure most forms of keratitis, the infection can cause:

Treatment depends on the cause of the keratitis. Infectious keratitis generally requires antibacterial, antifungal, or antiviral therapy to treat the infection. This treatment can involve prescription eyedrops, pills, or even intravenous therapy. Any corneal or conjunctivalforeign body should be removed. Wetting drops may be used if disturbance of the tears is suspected to be the cause of the keratitis. Steroid drops may be prescribed occaisionally to reduce inflammation and limit scarring. This must be done carefully and judiciously, since some infections can be worsened with their use.