Schizophrenia is a challenging disorder that makes it difficult to distinguish between what is real and unreal, think clearly, manage emotions, relate to others, and function normally. But that doesn't mean there isn't hope. Schizophrenia can be successfully managed. The first step is to identify the signs and symptoms. The second step is to seek help without delay. With the right treatment and support, a person with schizophrenia can lead a happy, fulfilling life.

Schizophrenia is a brain disorder that affects the way a person behaves, thinks, and sees the world. People with schizophrenia often have an altered perception of reality. They may see or hear things that don’t exist, speak in strange or confusing ways, believe that others are trying to harm them, or feel like they’re being constantly watched. This can make it difficult to negotiate the activities of daily life, and people with schizophrenia may withdraw from the outside world or act out in confusion and fear.

Although schizophrenia is a chronic disorder, there is help available. With support, medication, and therapy, many people with schizophrenia are able to function independently and live fulfilling lives.Early warning signs of schizophrenia

In some people, schizophrenia appears suddenly and without warning. But for most, it comes on slowly, with subtle warning signs and a gradual decline in functioning long before the first severe episode. Many friends and family members of people with schizophrenia report knowing early on that something was wrong with their loved one, they just didn’t know what.

In this early phase, people with schizophrenia often seem eccentric, unmotivated, emotionless, and reclusive. They isolate themselves, start neglecting their appearance, say peculiar things, and show a general indifference to life. They may abandon hobbies and activities, and their performance at work or school deteriorates.

The most common early warning signs of schizophrenia include:

While these warning signs can result from a number of problems—not just schizophrenia—they are cause for concern. When out-of-the-ordinary behavior is causing problems in your life or the life of a loved one, seek medical advice. If schizophrenia or another mental problem is the cause, treatment will help.

Signs and symptoms of schizophrenia

A delusion is a firmly-held idea that a person has despite clear and obvious evidence that it isn’t true. Delusions are extremely common in schizophrenia, occurring in more than 90% of those who have the disorder. Often, these delusions involve illogical or bizarre ideas or fantasies. Common schizophrenic delusions include:

Fragmented thinking is characteristic of schizophrenia. Externally, it can be observed in the way a person speaks. People with schizophrenia tend to have trouble concentrating and maintaining a train of thought. They may respond to queries with an unrelated answer, start sentences with one topic and end somewhere completely different, speak incoherently, or say illogical things.

Common signs of disorganized speech in schizophrenia include:

Schizophrenia disrupts goal-directed activity, causing impairments in a person’s ability to take care of him or herself, work, and interact with others. Disorganized behavior appears as:

The causes of schizophrenia are not fully known. However, it appears that schizophrenia usually results from a complex interaction between genetic and environmental factors.

But schizophrenia is only influenced by genetics, not determined by it. While schizophrenia runs in families, about 60% of schizophrenics have no family members with the disorder. Furthermore, individuals who are genetically predisposed to schizophrenia don’t always develop the disease, which shows that biology is not destiny.

Twin and adoption studies suggest that inherited genes make a person vulnerable to schizophrenia and then environmental factors act on this vulnerability to trigger the disorder.

As for the environmental factors involved, more and more research is pointing to stress, either during pregnancy or at a later stage of development. High levels of stress are believed to trigger schizophrenia by increasing the body’s production of the hormone cortisol.

Research points to several stress-inducing environmental factors that may be involved in schizophrenia, including:

In addition to abnormal brain chemistry, abnormalities in brain structure may also play a role in schizophrenia. Enlarged brain ventricles are seen in some schizophrenics, indicating a deficit in the volume of brain tissue. There is also evidence of abnormally low activity in the frontal lobe, the area of the brain responsible for planning, reasoning, and decision-making.

Some studies also suggest that abnormalities in the temporal lobes, hippocampus, and amygdala are connected to schizophrenia’s positive symptoms. But despite the evidence of brain abnormalities, it is highly unlikely that schizophrenia is the result of any one problem in any one region of the brain.

A diagnosis of schizophrenia is made based on a full psychiatric evaluation, medical history, physical exam, and lab tests.

The medical and psychological conditions the doctor must rule out before diagnosing schizophrenia include:

Prevention of schizophrenia is difficult as there are no reliable markers for the later development of the disorder.[104] There is tentative evidence for the effectiveness of early interventions to prevent schizophrenia.[105] While there is some evidence that early intervention in those with a psychotic episode may improve short-term outcomes, there is little benefit from these measures after five years.[11]Attempting to prevent schizophrenia in the prodrome phase is of uncertain benefit and therefore as of 2009 is not recommended.[106] Cognitive behavioral therapy may reduce the risk of psychosis in those at high risk after a year[107] and is recommended by the National Institute for Health and Care Excellence (NICE) in this group.[108] Another preventative measure is to avoid drugs that have been associated with development of the disorder, including cannabis, cocaine, and amphetamines.[8]

The primary treatment of schizophrenia is antipsychotic medications, often in combination with psychological and social supports.[11] Hospitalization may occur for severe episodes either voluntarily or (if mental health legislation allows it) involuntarily. Long-term hospitalization is uncommon since deinstitutionalization beginning in the 1950s, although it still occurs.[10] Community support services including drop-in centers, visits by members of a community mental health team, supported employment[109] and support groups are common. Some evidence indicates that regular exercise has a positive effect on the physical and mental health of those with schizophrenia.[110] 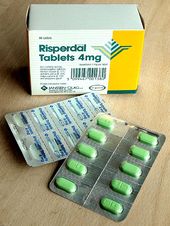 The first-line psychiatric treatment for schizophrenia is antipsychotic medication,[111] which can reduce the positive symptoms of psychosis in about 7 to 14 days. Antipsychotics, however, fail to significantly improve the negative symptoms and cognitive dysfunction.[30][112] In those on antipsychotics, continued use decreases the risk of relapse.[113][114] There is little evidence regarding effects from their use beyond two or three years.[114]

The choice of which antipsychotic to use is based on benefits, risks, and costs.[11] It is debatable whether, as a class, typical or atypical antipsychotics are better.[9][115]Amisulpride, olanzapine, risperidone and clozapine may be more effective but are associated with greater side effects.[116] Typical antipsychotics have equal drop-out and symptom relapse rates to atypicals when used at low to moderate dosages.[117] There is a good response in 40–50%, a partial response in 30–40%, and treatment resistance (failure of symptoms to respond satisfactorily after six weeks to two or three different antipsychotics) in 20% of people.[30] Clozapine is an effective treatment for those who respond poorly to other drugs ("treatment-resistant" or "refractory" schizophrenia),[118] but it has the potentially serious side effect of agranulocytosis (lowered white blood cell count) in less than 4% of people.[8][11][119]

Most people on antipsychotics have side effects. People on typical antipsychotics tend to have a higher rate of extrapyramidal side effects while some atypicals are associated with considerable weight gain, diabetes and risk of metabolic syndrome; this is most pronounced with olanzapine, while risperidone and quetiapine are also associated with weight gain.[116] Risperidone has a similar rate of extrapyramidal symptoms to haloperidol.[116] It remains unclear whether the newer antipsychotics reduce the chances of developing neuroleptic malignant syndrome or tardive dyskinesia, a rare but serious neurological disorder.[120]

For people who are unwilling or unable to take medication regularly, long-acting depot preparations of antipsychotics may be used to achieve control.[121] They reduce the risk of relapse to a greater degree than oral medications.[113] When used in combination with psychosocial interventions they may improve long-term adherence to treatment.[121] The American Psychiatric Association suggests considering stopping antipsychotics in some people if there are no symptoms for more than a year.[114]

A number of psychosocial interventions may be useful in the treatment of schizophrenia including: family therapy,[122] assertive community treatment, supported employment, cognitive remediation,[123]skills training, token economic interventions, and psychosocial interventions for substance use and weight management.[124] Family therapy or education, which addresses the whole family system of an individual, may reduce relapses and hospitalizations.[122] Evidence for the effectiveness of cognitive-behavioral therapy (CBT) in either reducing symptoms or preventing relapse is minimal.[125][126] Art or drama therapy have not been well-researched.[127][128] Music therapy has been shown to improve mental state and social functioning when paired with regular care.[129