Oligomenorrhea is the term for by light or infrequent menstrual periods. It occurs in women of childbearing age. Some variation in menstruation is normal. A woman who regularly goes more than 35 days without menstruating may be diagnosed with oligomenorrhea.Dec 23, 2013

Oligomenorrhea (or oligomenorrhoea) is infrequent (or, in occasional usage, very light) menstruation.More strictly, it is menstrual periods occurring at intervals of greater than 35 days, with only four to nine periods in a year. Also, menstrual periods should have been regularly established previously before the development of infrequent flow.[1] The duration of such events may vary.

Oligomenorrhea can be a result of prolactinomas (adenomas of the anterior pituitary). It may also be caused by thyrotoxicosis, hormonal changes inperimenopause, Prader–Willi syndrome, and Graves disease. "Endurance exercises such as running or swimming can affect the reproductive physiology of women athletes. Female runners, swimmers and ballet dancers menstruate infrequently in comparison to nonatheletic women of comparable age or not at all (amenorrhea). The degree of menstrual abnormality is directly proportional to the intensity of the exercise. For example,  have shown menstrual irregularity is more common, and more severe among tennis players than among golfers" (modified by a student paper written by A. Lord) Breastfeeding has also been linked to irregularity of menstrual cycles due to hormones which delay ovulation.

Women with polycystic ovary syndrome (PCOS) are also likely to suffer from oligomenorrhea. PCOS is a condition in which excessive androgens (male sex hormones) are released by the ovaries. Women with PCOS show menstrual irregularities that range from oligomenorrhea and amenorrhea, to very heavy, irregular periods. The condition affects about 6% of premenopausal women and is related to excess androgen production.

Eating disorders can also result in oligomenorrhea. Although menstrual disorders are most strongly associated with Anorexia nervosa, Bulimia nervosa may also result in oligomenorrhea or amenorrhea. There is some controversy regarding the exact mechanism for the menstrual dysregulation, since amenorrhea may sometimes precede substantial weight loss in some anorexics; thus some researchers hypothesize that some as-yet unrecognized neuroendocrine phenomenon may be involved, and the menstrual irregularities may be related to the biological undergirding of the disorders, rather than a result of nutritional deficiencies.

Medical dictionaries define oligomenorrhea as infrequent or very light menstruation. Butphysicians typically apply a narrower definition, restricting the diagnosis of oligomenorrhea towomen whose periods were regularly established before they developed problems with infrequentflow. With oligomenorrhea, menstrual periods occur at intervals of greater than 35 days, with onlyfour to nine periods in a year.

True oligomenorrhea can not occur until menstrual periods have been established. In the UnitedStates, 97.5% of women have begun normal menstrual cycles by age 16. The complete absenceof menstruation, whether menstrual periods never start or whether they stop after having beenestablished, is called amenorrhea. Oligomenorrhea can become amenorrhea if menstruationstops for six months or more.
It is quite common for women at the beginning and end of their reproductive lives to miss or haveirregular periods. This is normal and is usually the result of imperfect coordination between thehypothalamus, the pituitary gland, and the ovaries. For no apparent reason, a few womenmenstruate (with ovulation occurring) on a regular schedule as infrequently as once every twomonths. For them that schedule is normal and not a cause for concern.
Women with polycystic ovary syndrome (PCOS) are also likely to suffer from oligomenorrhea.PCOS is a condition in which the ovaries become filled with small cysts. Women with PCOSshow menstrual irregularities that range from oligomenorrhea and amenorrhea on the one hand tovery heavy, irregular periods on the other. The condition affects about 6% of premenopausalwomen and is related to excess androgen production.
Other physical and emotional factors also cause a woman to miss periods. These include:
Professional ballet dancers, gymnasts, and ice skaters are especially at risk for oligomenorrheabecause they combine strenuous physical activity with a diet intended to keep their weightdown. Menstrual irregularities are now known to be one of the three disorders comprising the so-called "female athlete triad," the other disorders being disordered eating and osteoporosis. Thetriad was first formally named at the annual meeting of the American College of Sports Medicinein 1993, but doctors were aware of the combination of bone mineral loss, stress fractures,eating disorders, and participation in women's sports for several decades before the triad wasnamed. Women's coaches have become increasingly aware of the problem since the early1990s, and are encouraging female athletes to seek medical advice.

Symptoms of oligomenorrhea include:
Oligomenorrhea that occurs in adolescents is often caused by immaturity or lack ofsynchronization between the hypothalamus, pituitary gland, and ovaries. The hypothalamus ispart of the brain that controls body temperature, cellular metabolism, and basic functions suchas eating, sleeping, and reproduction. It secretes hormones that regulate the pituitary gland.
The pituitary gland is then stimulated to produce hormones that affect growth and reproduction.At the beginning and end of a woman's reproductive life, some of these hormone messages maynot be synchronized, causing menstrual irregularities.
In PCOS, oligomenorrhea is probably caused by inappropriate levels of both female and malehormones. Male hormones are produced in small quantities by all women, but in women withPCOS, levels of male hormone (androgens) are slightly higher than in other women. Morerecently, however, some researchers are hypothesizing that the ovaries of women with PCOSare abnormal in other respects. In 2003, a group of researchers in London reported that there arefundamental differences between the development of egg follicles in normal ovaries and follicledevelopment in the ovaries of women with PCOS.
In athletes, models, actresses, dancers, and women with anorexia nervosa, oligomenorrheaoccurs because the ratio of body fat to weight drops too low.

Diagnosis of oligomenorrhea begins with the patient informing the doctor about infrequentperiods. The doctor will ask for a detailed description of the problem and take a history of howlong it has existed and any patterns the patient has observed. A woman can assist the doctor indiagnosing the cause of oligomenorrhea by keeping a record of the time, frequency, length, andquantity of bleeding. She should also tell the doctor about any recent illnesses, includinglongstanding conditions like diabetes mellitus. The doctor may also inquire about the patient'sdiet, exercise patterns, sexual activity, contraceptive use, current medications, or past surgicalprocedures.
The doctor will then perform a physical examination to evaluate the patient's weight inproportion to her height, to check for signs of normal sexual development, to make sure the heartrhythm and other vital signs are normal, and to palpate (feel) the thyroid gland for evidence ofswelling.
In the case of female athletes, the doctor may need to establish a relationship of trust with thepatient before asking about such matters as diet, practice and workout schedules, and the useof such drugs as steroids or ephedrine. The presence of stress fractures in young women shouldbe investigated. In some cases, the doctor may give the patients the Eating Disorder Inventory(EDI) or a similar screening questionnaire to help determine whether the patient is at risk fordeveloping anorexia or bulimia.

After taking the woman's history, the gynecologist or family practitioner does a pelvicexamination and Pap test. To rule out specific causes of oligomenorrhea, the doctor may alsodo a pregnancy test and blood tests to check the level of thyroid hormone. Based on the initialtest results, the doctor may want to do tests to determine the level of other hormones that play arole in reproduction.
As of 2003, more sensitive monoclonal assays have been developed for measuring hormonelevels in the blood serum of women with PCOS, thus allowing earlier and more accuratediagnosis.

Oligomenorrhea is a medical term which generally refers to irregular or infrequentmenstrual periods with intervals of more than 35 days - however, the duration may vary.

A period, or menstruation, is the shedding of the endometrium - the lining of the uterus. Menstruation is also called menses. All female humans, as well as a number of other female mammals, have regular periods during their reproductive age. Menstruation, which includes bleeding from the vagina, occurs mainly among humans and similar animals, such as primates. In many mammals, the endometrium is reabsorbed.

As far as humans are concerned a period is a bleed from the womb (uterus) that is released through the vagina. Human females have a period about every 28 days - most women have between 11 and 13 menstrual periods each year. However, some women may have a 24-day cycle while other may have a 35-day one. A period is part of the female's menstrual cycle.

Periods usually start between the ages of 10 and 16 (during puberty), and continue until themenopause, when woman is 45 to 55 years old. Periods can take up to two years to occur in a regular cycle. After puberty, the majority of females have a regular menstrual cycle (the length of time between each period is similar).

Menstrual bleeding usually lasts for about five days, but can vary from two to seven days.

Some women have irregular periods - the time between periods, as well as the amount of blood shed varies considerably. This may have several possible causes, including a change incontraception method, a hormone imbalance, hormonal changes in perimenopause, and endurance exercises.

There are two main reasons for irregular periods:

§  A change in the contraception method 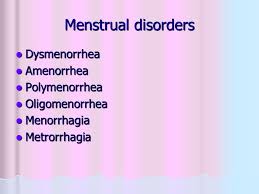 What are the treatment options for irregular periods?

If the irregular periods occur during puberty or as the woman approaches the menopause, treatment is not usually necessary.