What Is Ear Barotrauma?

Ear barotrauma is a condition that causes ear discomfort due to pressure changes.

In each ear there is a tube that connects the middle of your ear to your throat and nose. It also helps regulate ear pressure. This tube is called the eustachian tube and is named after the 16th century anatomist who discovered it. When the tube is blocked for some reason, you may experience ear barotrauma.

Occasional ear barotrauma is common, especially in environments where the altitude changes. While the condition isn’t harmful in some people, frequent cases may cause further complications. It’s important to understand the differences between acute (occasional) and chronic (recurring) cases so you know when to seek medical treatment.

Recognizing Ear Barotrauma Symptoms Ear barotrauma is marked by an uncomfortable pressure inside the ear. Symptoms may include:

Altitude changes are the most common cause of this condition. One of the places many people experience ear barotrauma is during an airplane’s ascent or descent. The condition is sometimes referred to as airplane ear.

Ear barotraumaEar barotrauma is discomfort in the ear due to pressure differences between the inside and outside of the eardrum. It may include damage to the ear.

Many people have barotrauma at some time. The problem often occurs with altitude changes, such as flying, scuba diving, or driving in the mountains. If you have a congested nose from allergies, colds, or an upper respiratory infection, you are more likely to develop barotrauma.

Blockage of the Eustachian tube could also be present before birth (congenital). It may also be caused by swelling in the throat.

Other symptoms may develop if the condition is very bad or goes on for a long time, such as:

During an exam of the ear, the health care provider may see a slight outward bulge or inward pull of the eardrum. If the condition is severe, there may be blood or bruising behind the eardrum.

Severe barotrauma may be look similar to an ear infection. 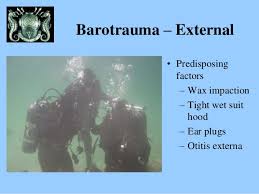 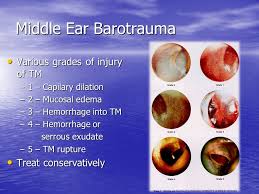 Try home care measures first. Call your health care provider if the discomfort does not ease after a few hours.

Call your provider if you have barotrauma and new symptoms develop, especially:

Most cases of ear barotrauma generally heal without medical intervention. There are some self-care steps you can take for immediate relief. You may help relieve the effects of air pressure on your ears by:

In severe cases, your doctor may prescribe an antibiotic or a steroid to help clear up the problem.

Chronic cases of ear barotrauma may be aided with the help of ear tubes. These small cylinders are placed through the eardrum to stimulate airflow into the middle of the ear. Ear tubes, also known as tympanostomy tubes or grommets, are most commonly used in children and they can help prevent infections from ear barotrauma.

Ear barotrauma is usually temporary. However, complications may arise in some people, especially in chronic cases. If left untreated, this condition may cause:

You can decrease your risk of experiencing chronic barotrauma by taking antihistamines (take the night before) or decongestants (nasal spray is the best choice) before scuba diving or flying on a plane. You should always check with your doctor and be aware of possible side effects before taking new medications.

You can use nasal decongestants or antihistamines before altitude changes. Try to avoid altitude changes while you have an upper respiratory infection or allergy attack.

Talk to your doctor about using decongestants if you plan to scuba dive.When sudden changes in pressure cause a sense of fullness or pain in the ear, often the pressure in the middle ear can be equalized and the discomfort can be relieved by several maneuvers. If outside pressure is decreasing, as in a plane ascending, the person should try breathing with the mouth open, chewing gum, or swallowing. Any of these measures may open the eustachian tube and allow air

To relieve ear pain or discomfort, you can take steps to open the Eustachian tube and relieve the pressure, such as:

When flying, do not sleep as the plane prepares to land. Repeat the listed steps to open the Eustachian tube. For infants and small children, nursing or taking sips of a drink may help.

Scuba divers should go down and come up slowly. Diving while you have allergies or a respiratory infection is dangerous. Barotrauma may be severe in these situations.

If self-care steps do not ease discomfort within a few hours or the problem is severe, you may need to see a health care provider.

You may need medicine to relieve nasal congestion and allow the Eustachian tube to open. These include:

You may need antibiotics to prevent an ear infection if barotrauma is severe.

Rarely, surgery may be needed if other treatments do not work to open the tube. In this procedure, a surgical cut is made in the eardrum to allow pressure to become equal and fluid to drain (myringotomy).

If you must change altitude often or you are prone to barotrauma, you may need to have surgery to place tubes in the ear drum. This is not an option for scuba diving.

out of the middle ear. If outside pressure is increasing, as in a plane descending or a diver going deeper underwater, the person should pinch the nose shut, hold the mouth closed, and try to blow gently out through the nose. This will force air through the blocked eustachian tube. People who have an infection or an allergy affecting the nose and throat may experience discomfort when they fly in a plane or dive. However, if flying is necessary, a decongestant, such as phenylephrine nose drops or nasal spray, relieves congestion and helps open the eustachian tubes, equalizing pressure on the eardrums. Diving should be avoided until the infection or allergy is controlled.