Filariasis is a disease group affecting humans and animals, caused by filariae; ie, nematode parasites of the order Filariidae.[1] Of the hundreds of described filarial parasites, only 8 species cause natural infections in humans. The World Health Organization (WHO) has identified lymphatic filariasis as the second leading cause of permanent and long-term disability in the world, after leprosy.

In lymphatic filariasis, repeated episodes of inflammation and lymphedema lead to lymphatic damage, chronic swelling, and elephantiasis of the legs (see the image below), arms, scrotum, vulva, and breasts .[2, 3, 4, 5, 6, 7] 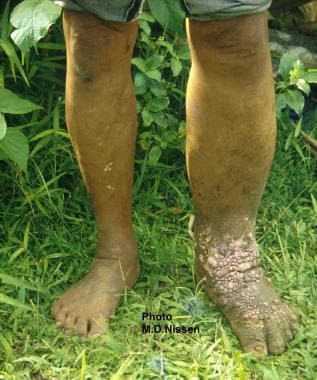 The following acute syndromes have been described in filariasis:

The clinical triad of infection in onchocerciasis is as follows:

The diagnostic feature of loiasis is a Calabar swelling, ie, a large, transient area of localized, nonerythematous subcutaneous edema. This is most common around the joints.

These are usually asympt omatic. If symptoms are present, they may include fever, pruritus, skin lumps, lymphadenitis, and abdominal pain.

Microfilariae can be detected through examination of the following:

The following imaging studies can be used in the evaluation of filariasis:

Histologic findings include the following:

Anthelmintics used in the treatment of filariasis include the following:

In lymphatic filariasis, large hydroceles and scrotal elephantiasis can be managed with surgical excision. Correcting gross limb elephantiasis with surgery is less successful and may necessitate multiple procedures and skin grafting.

In onchocerciasis, nodulectomy with local anesthetic is a common treatment to reduce skin and eye complications.

Filariasis (or philariasis) is a parasitic disease caused by an infection with roundworms of the Filarioidea type.[1] These are spread by blood-feeding black flies and mosquitoes. This disease belongs to the group of diseases called helminthiases.

Eight known filarial nematodes use humans as their definitive hosts. These are divided into three groups according to the niche within the body they occupy:

·         Lymphatic filariasis is caused by the worms Wuchereria bancrofti, Brugia malayi, and Brugia timori. These worms occupy the lymphatic system, including the lymph nodes; in chronic cases, these worms lead to the syndrome of elephantiasis.

The adult worms, which usually stay in one tissue, release early larval forms known as microfilariae into the host's bloodstream. These circulating microfilariae can be taken up with a blood meal by the arthropod vector; in the vector, they develop into infective larvae that can be transmitted to a new host.

The most spectacular symptom of lymphatic filariasis is elephantiasis—edema with thickening of the skin and underlying tissues—which was the first disease discovered to be transmitted by mosquito bites.[2] Elephantiasis results when the parasites lodge in the lymphatic system.

Elephantiasis affects mainly the lower extremities, while the ears, mucous membranes, and amputation stumps are affected less frequently. However, different species of filarial worms tend to affect different parts of the body; Wuchereria bancrofti can affect the legs, arms, vulva, breasts, and scrotum (causing hydrocele formation), while Brugia timori rarely affects the genitals.[citation needed] Those who develop the chronic stages of elephantiasis are usually amicrofilaraemic, and often have adverse immunological reactions to the microfilariae, as well as the adult worms

The subcutaneous worms present with rashes, urticarial papules, and arthritis, as well as hyper- and hypopigmentation macules. Onchocerca volvulus manifests itself in the eyes, causing "river blindness" (onchocerciasis), one of the leading causes of blindness in the world.[citation needed] Serous cavity filariasis presents with symptoms similar to subcutaneous filariasis, in addition to abdominal pain, because these worms are also deep-tissue dwellers.

Human filarial nematode worms have complicated lifecycles, which primarily consists of five stages. After the male and female worms mate, the female gives birth to live microfilariae by the thousands. The microfilariae are taken up by the vector insect (intermediate host) during a blood meal. In the intermediate host, the microfilariae molt and develop into third-stage (infective) larvae. Upon taking another blood meal, the vector insect injects the infectious larvae into the dermis layer of the skin. After about one year, the larvae molt through two more stages, maturing into the adult worms.

Filariasis is usually diagnosed by identifying microfilariae on Giemsa stained, thin and thick blood film smears, using the "gold standard" known as the finger prick test. The finger prick test draws blood from the capillaries of the finger tip; larger veins can be used for blood extraction, but strict windows of the time of day must be observed. Blood must be drawn at appropriate times, which reflect the feeding activities of the vector insects. Examples are W. bancrofti, whose vector is a mosquito; night is the preferred time for blood collection. Loa loa's vector is the deer fly; daytime collection is preferred. This method of diagnosis is only relevant to microfilariae that use the blood as transport from the lungs to the skin. Some filarial worms, such as M. streptocerca and O. volvulus, produce microfilarae that do not use the blood; they reside in the skin only. For these worms, diagnosis relies upon skin snips, and can be carried out at any time. 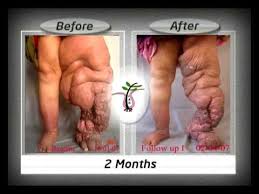 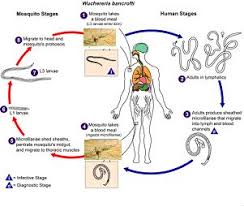 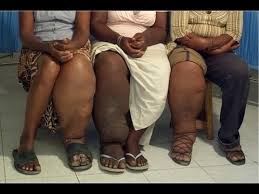 The recommended treatment for people outside the United States is albendazole (a broad-spectrum anthelmintic) combined with ivermectin. A combination of diethylcarbamazine and albendazole is also effective. All of these treatments are microfilaricides; they have no effect on the adult worms. Different trials were made to use the known drug at its maximum capacity in absence of new drugs. In a study from India, it was shown that a formulation of albendazole had better anti-filarial efficacy than albendazole itself.

In 2003, the common antibiotic doxycycline was suggested for treating elephantiasis.[7] Filarial parasites have symbiotic bacteria in the genus Wolbachia, which live inside the worm and seem to play a major role in both its reproduction and the development of the disease.                                   Other animals

Filariasis can also affect domesticated animals, such as cattle, sheep, and dogs.