A foreign object in the ear can cause pain and hearing loss. Usually you know if an object is stuck in your ear, but small children may not be aware of it.

If an object becomes lodged in the ear, follow these steps:

If these methods fail or the person continues to experience pain in the ear, reduced hearing or a sensation of something lodged in the ear, seek medical assistance.

It is often said that you should never put anything in your ear that is smaller than your elbow. The main reason to avoid blindly putting something into your ear is that it usually results in pushing any object deeper into the ear canal. This not only can damage the eardrum, but also make ultimate removal of the object more difficult. This is particularly true of earwax.

·         Earwax is usually the consistency of toothpaste. When a Q-Tip or similar object is used to get the wax out, most of the wax is packed deeply into the ear canal. It then often hardens and is much more difficult to remove.

·         The shape of the ear canal is slightly changed by pulling back on the ear's pinna (the circular part of the ear on the side of the head). By placing the affected ear down and gently wiggling the ear pinna, you may be able to shift the object enough to cause it to fall out.

·         If an object becomes lodged in the ear and this technique fails, it is usually best to have it removed by a doctor who can view the object with proper lighting and instruments.

·         Having a live insect in your ear can be extremely uncomfortable. People are often desperate to get the bug to stop moving. If you do not have a known hole in your eardrum, it is usually safe to place a few drops of mineral oil into the ear. This will kill the bug and allow you to calmly and safely get to a medical office for further care.

Treatment will largely depend on the location and object or objects involved. Do not be surprised if your doctor uses his or her own unique technique to remove an object. Years of experience often provide innovative techniques that are safe and effective.

·         Commonly used techniques include applying gentle suction to the object, small forceps, or instruments that have a loop or hook at the tip.

·         If the object is metallic, a long instrument may be magnetized to assist in gently pulling the object from the ear.

·         Another common technique involves irrigating the ear. If the eardrum appears intact, warm water can be gently squirted past the object using a small catheter. The water will turn around at the end of the ear canal and often wash the object out.

·         Any experienced professional can tell you that children typically struggle with these techniques. Struggling will decrease the likelihood of success and increase the chance for complications. Sedation of the child may be considered an option to allow calm and comfortable removal of the object, if necessary. 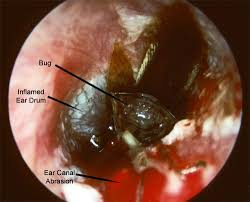 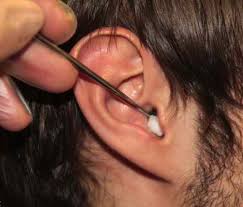 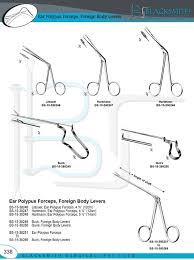 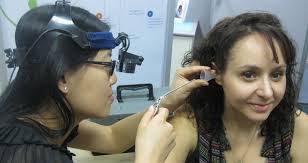 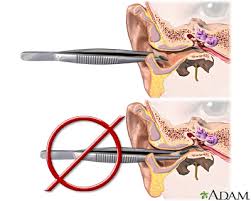 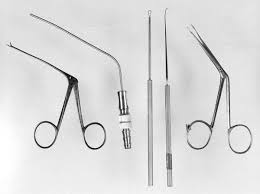