Emphysema is a condition that forms part of chronic obstructive pulmonary disease (COPD) and involves the enlargement of the air sacs in the lung.2-4

The alveoli at the end of the bronchioles of the lung become enlarged because of the breakdown of their walls. The fewer and larger damaged sacs that result mean there is a reduced surface area for the exchange of oxygen into the blood and carbon dioxide out of it.2-4

The damage is permanent - not reversible - and it causes reduced respiratory function and breathlessness. The damage takes a number of forms - the sacs can be destroyed, narrowed, collapsed, stretched or over-inflated.2-5

The biggest known cause or risk factor for emphysema - and for COPD - is smoking.4,6-8 Cigarette smoking is responsible for around 90% of cases of COPD.7However, COPD will develop only in smokers who are genetically susceptible - smoking does not always lead to the disease.Other inhaled toxins also lead to emphysema and COPD, including work-related ones. In developing countries, smoke from indoor cooking and heating is also an important cause.7,8

While the following are not as important as primary cigarette smoke exposure, they are minor contributory risk factors:4,7,8

Genetics are responsible for a rare form of COPD - emphysema can be caused by ?1-antitrypsin deficiency. The protein is necessary for protecting the lungs against neutrophil elastase destruction of alveolar tissue.8,9 The deficiency is congenital - that is, people are born with it.

The genetic disease affects non-smokers, explaining some of the cases, with onset earlier in life, of COPD that are not caused by smoking. Smoking does, however, accelerate genetically predisposed cases of emphysema.8

Two symptoms are the main markers of emphysema and present early on:4,9,10

Shortness of breath is also known as dyspnea and gives the feeling of being unable to catch a breath. This symptom may be present only during physical exertion but as the disease progresses may be present during rest, too - emphysema and COPD take years to develop and progress.8-10

Other symptoms may be experienced, especially in more advanced lung disease:4,6,8,10

Many of the symptoms of emphysema and COPD are shared by other medical conditions; it is important to seek a doctor's examination and diagnosis.

Tests and diagnosis of emphysema

Specific tests are used to identify emphysema and COPD, and doctors also perform physical examinations and "take histories" (ask questions about the problem) to support a diagnosis. This also helps to differentiate it from other conditions such as asthma and heart failure.8

If the cause of the emphysema is thought to be a rare case of ?1-antitrypsin deficiency - there has been no smoking or other typical risk factor, for example, or a close relative has the deficiency - a laboratory test can be ordered to diagnose this.11

Lung function testing is used to:8

A chest X-ray may be ordered during diagnosis.

Lung function tests also help to monitor the progression of the disease and to assess response to treatment.8

Spirometry assesses airflow obstruction and is measured according to the reduction in forced expiratory volume after bronchodilator treatment.7

For the test, patients blow as fast and hard as possible into a tube attached to a machine that measures the volume and speed of air blown out.6

Forced expiratory volume in one second is abbreviated to FEV1. Four stages of COPD from mild to severe are determined by the percentage of predicted (average healthy) values.7

Other tests used by doctors in the process of diagnosing COPD and emphysema include imaging of the lungs via chest X-ray or CT scanning (computed tomography), and arterial blood gas analysis to assess O2/CO2 exchange.6,10 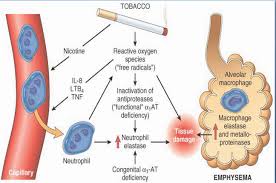 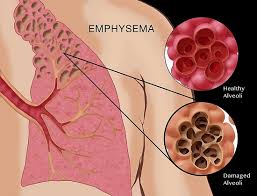 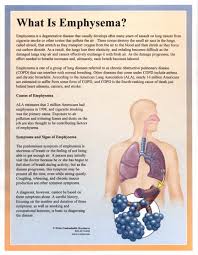 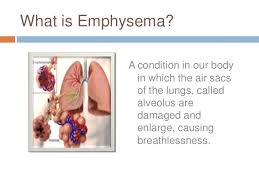 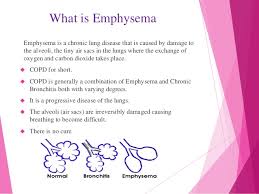 There are two main elements to the management of COPD and emphysema: medication and supportive therapy, which includes oxygen therapy and help with smoking cessation. The stable chronic disease is continuously treated to relieve symptoms and prevent exacerbations/complications, which are treated as they arise.8,10

The mainstay of medications used in people with COPD and emphysema are inhaled bronchodilators to relieve symptoms.8,10 They help by relaxing and opening the air passages in the lungs, and include these classes of drug:

These bronchodilators are equally effective when used regularly to improve lung function and increase exercise capacity.8 The particular use of short- versus long-acting drugs, or of combination treatment, depends on individual factors, preferences and symptoms. Example bronchodilators include albuterol, formoterol, indacaterol and salmeterol.8

Steroids are inhaled as an aerosol spray, and can help relieve symptoms of emphysema associated with asthma and bronchitis.10

Corticosteroids may be introduced in people who have poorly controlled symptoms and regularly suffer exacerbations in spite of bronchodilator use.8

In patients with COPD who continue to smoke, corticosteroids do not alter the course of the disease, but they do relieve symptoms and improve short-term lung function in some patients. They also have an additive effect to bronchodilators, and can reduce exacerbation frequency.8

Corticosteroid treatment carries the long-term risk of side-effects that includeosteoporosis and cataract formation.8

As emphysema progresses and respiratory function declines, this makes independent breathing increasingly difficult. Oxygen therapy improves oxygen delivery to the lungs by supplementing it via a number of device options, including those used in the home.10

Delivery is by electrically driven oxygen concentrators, liquid oxygen systems, or cylinders of compressed gas, depending on back-up needs and how much time is spent outdoors or at home.8

Oxygen or O2 therapy can be administered 24 hours a day or 12 hours nocturnally. It prolongs life for people with advanced COPD and emphysema.8

Treatment will be monitored with oxygen saturation measurements and possibly sleep studies.8

Air travel may create the need for supplemental oxygen due to the lower flight cabin air pressure.8

Pulmonary rehabilitation is a program of care for people with emphysema that includes the below supportive measures of help with smoking cessation and nutrition, but also includes help with physical activities - exercise, education and behavioral interventions.8,10

Pulmonary rehabilitation may not change the overall course of the illness but can improve an ability to live with the condition, and improve exercise capacity and quality of life.8

Because cigarette smoking is an established cause of COPD and emphysema, not taking it up or stopping it is preventive.4,7,8

Decline in lung function is worse for people who continue to smoke.

Vaccination is preventive of exacerbations in people with COPD and emphysema - an annual flu immunization is required and a 5-yearly one against pneumonia may be recommended.8,10

Reduced lung capacity places higher energy demand on daily activities so people with emphysema can be at risk of weight loss and nutritional deficiency.8

While maintaining sufficient nutrition is important, so too is not putting on too much weight - and obese people with emphysema are encouraged to lose weight.8

Surgical options may be considered for people with severe emphysema - either lung volume reduction surgery or, in the last-case scenario, lung transplantation.8,10

Lung volume reduction surgery is designed to remove small wedges of the damaged, emphysematous, lung tissue.8,10 This is thought to enhance lung recoil and to improve the function of the diaphragm, improving, for severe cases, lung function, exercise tolerance and quality of life.8

Lung transplantation improves quality of life, though not life-expectancy, for people with severe cases of emphysema, and requires lifelong drug therapy to suppress the immune system against tissue rejection. One or both lungs may be transplanted.8

The drug and oxygen therapies above may be used when complications develop, as may antibiotics when the acute exacerbation is caused by a bacterial infection indicated by pussy (purulent) sputum.8

Most exacerbations of COPD are treated with corticosteroid drugs such as prednisone. Some cases require mechanical ventilation for oxygen therapy, and some cases receiving oxygen in the hospital will take oxygen therapy home for the first time on discharge.8

Severe coughing and pain may be relieved by opioid drugs.8