Scarlet fever is a bacterial illness that develops in some people who have strep throat. Also known as scarlatina, scarlet fever features a bright red rash that covers most of the body. Scarlet fever is almost always accompanied by a sore throat and a high fever.

Scarlet fever is most common in children 5 to 15 years of age. Although scarlet fever was once considered a serious childhood illness, antibiotic treatments have made it less threatening. Still, if left untreated, scarlet fever can result in more-serious conditions that affect the heart, kidneys and other parts of the body.The rash and the redness in the face and tongue usually last about a week. After these signs and symptoms have subsided, the skin affected by the rash often peels. Other signs and symptoms associated with scarlet fever include:

The signs and symptoms that give scarlet fever its name include:

With the right treatment, further problems are unlikely. However, there's a small risk of the infection spreading to other parts of the body and causing more serious infections, such as an ear infection, sinusitis, orpneumonia.

GPs, schools and nurseries should be aware of the current high levels of scarlet fever and inform local health protection teams if they become aware of cases, particularly if more than one child is affected.

Children and adults should cover their mouth and nose with a tissue when they cough or sneeze and wash their hands with soap and water after using or disposing of tissues.

The treatment and course of scarlet fever are no different from those of any strep throat.

A drug-resistant strain of scarlet fever, resistant to macrolide antibiotics such as erythromycin, but retaining drug-sensitivity to beta-lactam antibiotics such as penicillin, emerged in Hong Kong in 2011, accounting for at least two deaths in that city—the first such in over a decade.[14] About 60% of circulating strains of the group A Streptococcus that cause scarlet fever in Hong Kong are resistant to macrolideantibiotics, says Professor Kwok-yung Yuen, head of Hong Kong University's microbiology department. Previously, observed resistancerates had been 10–30%; the increase is likely the result of overuse of macrolide antibiotics in recent years.

No vaccines are currently available to protect against S. pyogenes infection; the vaccine developed by George and Gladys Dick in 1924 was discontinued due to poor efficacy and the introduction of antibiotics. Difficulties in vaccine development include the considerable strain variety of S. pyogenes present in the environment and the amount of time and number of people needed for appropriate trials for safety and efficacy of any potential vaccine.[15]

An association between scarlet fever and hepatitis has been recognized for several decades. 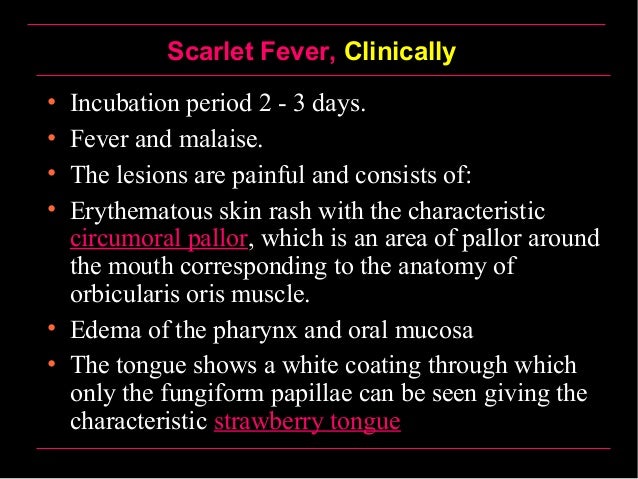