A stroke is the sudden death of brain cells in a localized area due to inadequate blood flow.

A stroke occurs when blood flow is interrupted to part of the brain. Without blood to supplyoxygen and nutrients and to remove waste products, brain cells quickly begin to die. Dependingon the region of the brain affected, a stroke may cause paralysis, speech impairment, loss ofmemory and reasoning ability, coma, or death. A stroke also is sometimes called a brain attackor a cerebrovascular accident (CVA).
Stroke is a medical emergency requiring immediate treatment. Prompt treatment improves thechances of survival and increases the degree of recovery that may be expected. A person whomay have suffered a stroke should be seen in a hospital emergency room without delay.Treatment to break up a blood clot, the major cause of stroke, must begin within three hours ofthe stroke to be effective. Improved medical treatment of all types of stroke has resulted in adramatic decline in death rates in recent decades. In 1950, nine in ten died from stroke,compared to slightly less than one in three in the twenty-first century. However, about two-thirdsof stroke survivors will have disabilities ranging from moderate to severe.

There are four main types of stroke. Cerebral thrombosis and cerebral embolism are caused byblood clots that block an artery supplying the brain, either in the brain itself or in the neck.These account for 70-80% of all strokes. Subarachnoid hemorrhage and intracerebralhemorrhage occur when a blood vessel bursts around or in the brain.
Cerebral thrombosis occurs when a blood clot, or thrombus, forms within the brain itself,blocking the flow of blood through the affected vessel. Clots most often form due to "hardening"(atherosclerosis) of brain arteries. Cerebral thrombosis occurs most often at night or early in themorning. Cerebral thrombosis is often preceded by a transient ischemic attack, or TIA,sometimes called a "mini-stroke." In a TIA, blood flow is temporarily interrupted, causing short-lived stroke-like symptoms. Recognizing the occurrence of a TIA, and seeking immediatetreatment, is an important step in stroke prevention.
Cerebral embolism occurs when a blood clot from elsewhere in the circulatory system breaksfree. If it becomes lodged in an artery supplying the brain, either in the brain or in the neck, it cancause a stroke. The most common cause of cerebral embolism is atrial fibrillation, a disorder ofthe heart beat. In atrial fibrillation, the upper chambers (atria) of the heart beat weakly andrapidly, instead of slowly and steadily. Blood within the atria is not completely emptied. Thisstagnant blood may form clots within the atria, which can then break off and enter the circulation.Atrial fibrillation is a factor in about 15% of all strokes. The risk of a stroke from atrial fibrillationcan be dramatically reduced with daily use of anticoagulant medication.
Hemorrhage, or bleeding, occurs when a blood vessel breaks, either from trauma or excessinternal pressure. The vessels most likely to break are those with preexisting defects such as ananeurysm. An aneurysm is a "pouching out" of a blood vessel caused by a weak arterial wall.Brain aneurysms are surprisingly common. According to autopsy studies, about 6% of allAmericans have them. Aneurysms rarely cause symptoms until they burst. Aneurysms are mostlikely to burst when blood pressure is highest, and controlling blood pressure is an importantpreventive strategy.
Intracerebral hemorrhage affects vessels within the brain itself, while subarachnoid hemorrhageaffects arteries at the brain's surface, just below the protective arachnoid membrane.Intracerebral hemorrhages represent about 10% of all strokes, while subarachnoid hemorrhagesaccount for about 7%.
In addition to depriving affected tissues of blood supply, the accumulation of fluid within theinflexible skull creates excess pressure on brain tissue, which can quickly become fatal.Nonetheless, recovery may be more complete for a person who survives hemorrhage than for onewho survives a clot, because the blood deprivation effects usually are not as severe.
Death of brain cells triggers a chain reaction in which toxic chemicals created by cell deathaffect other nearby cells. This is one reason why prompt treatment can have such a dramaticeffect on final recovery.

Risk factors for stroke involve age, sex, heredity, predisposing diseases or other medicalconditions, use of certain medications, and lifestyle choices:

Symptoms of an embolic stroke usually come on quite suddenly and are at their most intenseright from the start, while symptoms of a thrombotic stroke come on more gradually. Symptomsmay include:

The diagnosis of stroke is begun with a careful medical history, especially concerning the onsetand distribution of symptoms, presence of risk factors, and the exclusion of other possiblecauses. A brief neurological exam is performed to identify the degree and location of any deficits,such as weakness, incoordination, or visual losses.
Once stroke is suspected, a computed tomography scan (CT scan) or magnetic resonance imaging (MRI) scan is performed to distinguish a stroke caused by blood clot from one causedby hemorrhage, a critical distinction that guides therapy. Blood and urine tests are doneroutinely to look for possible abnormalities.

1. A sudden loss of neurological function,caused by vascular injury (loss of bloodflow) to an area of the brain. Stroke isboth common and deadly: about 700,000strokes occur in the U.S. each year.Stroke is the third leading cause of deathin the U.S. Because of the long-termdisability it often produces, stroke is thedisease most feared by older Americans.In the U.S., 80% of strokes are causedby cerebral infarction (i.e., blockage of thecarotid or intracerebral arteries by clot oratherosclerosis); intracranial hemorrhageand cerebral emboli are responsible formost other strokes. Innovations in themanagement of stroke (e.g., inprevention, the early use of thrombolyticdrugs, vascular ultrasonography, andendarterectomy) have revolutionized theacute and follow-up care of the strokepatient. Synonym: apoplexy; attack, brain; cerebrovascular accident See:carotid endarterectomy; intracranial hemorrhage; transient ischemic attack; illustration; table

Emergency treatment of stroke from a blood clot is aimed at dissolving the clot. This"thrombolytic therapy" currently is performed most often with tissue plasminogen activator, or t-PA. t-PA must be administered within three hours of the stroke event. Therefore, patients whoawaken with stroke symptoms are ineligible for t-PA therapy, as the time of onset cannot beaccurately determined. t-PA therapy has been shown to improve recovery and decrease long-term disability in selected patients. t-PA therapy carries a 6.4% risk of inducing a cerebralhemorrhage, and is not appropriate for patients with bleeding disorders, very high blood pressure,known aneurysms, any evidence of intracranial hemorrhage, or incidence of stroke, head trauma,or intracranial surgery within the past three months. Patients with clot-related (thrombotic orembolic) stroke who are ineligible for t-PA treatment may be treated with heparin or other bloodthinners, or with aspirin or other anti-clotting agents in some cases.
Emergency treatment of hemorrhagic stroke is aimed at controlling intracranial pressure.Intravenous urea or mannitol plus hyperventilation is the most common treatment.Corticosteroids also may be used. Patients with reversible bleeding disorders, such as thosedue to anticoagulant treatment, should have these bleeding disorders reversed, if possible.
Surgery for hemorrhage due to aneurysm may be performed if the aneurysm is close enough tothe cranial surface to allow access. Ruptured vessels are closed off to prevent rebleeding. Foraneurysms that are difficult to reach surgically, endovascular treatment may be used. In thisprocedure, a catheter is guided from a larger artery up into the brain to reach the aneurysm.Small coils of wire are discharged into the aneurysm, which plug it up and block off blood flowfrom the main artery.

Damage from stroke may be significantly reduced through emergency treatment. Knowing thesymptoms of stroke is as important as knowing those of a heart attack. Patients with strokesymptoms should seek emergency treatment without delay, which may mean dialing 911 ratherthan their family physician.
The risk of stroke can be reduced through lifestyle changes:
Treatment of atrial fibrillation may significantly reduce the risk of stroke. Preventive anticoagulanttherapy may benefit those with untreated atrial fibrillation. Warfarin (Coumadin) has proven to bemore effective than aspirin for those with higher risk. A new drug called ximelagatran (Exanta)with fewer side effects has been introduced in Europe. The drug's manufacturer was applying forFDA approval to market the drug for use in preventing stroke and other thromboemboliccomplications in early 2004.
In 2003, physicians at the Framingham Heart Study derived new risk scores to help physiciansdetermine which patients with new onset of atrial fibrillation are at higher risk for stroke alone orfor stroke or death. Screening for aneurysms may be an effective preventive measure in thosewith a family history of aneurysms or autosomal polycystic kidney disease, which tends to beassociated with aneurysms.
Aneurysm — A pouchlike bulging of a blood vessel. Aneurysms can rupture, leading to stroke.
Atrial fibrillation — A disorder of the heart beat associated with a higher risk of stroke. In thisdisorder, the upper chambers (atria) of the heart do not completely empty when the heart beats,which can allow blood clots to form.
Cerebral embolism — A blockage of blood flow through a vessel in the brain by a blood clotthat formed elsewhere in the body and traveled to the brain.
Cerebral thrombosis — A blockage of blood flow through a vessel in the brain by a blood clotthat formed in the brain itself.
Intracerebral hemorrhage — A cause of some strokes in which vessels within the brain beginbleeding.
Subarachnoid hemorrhage — A cause of some strokes in which arteries on the surface of thebrain begin bleeding.
Tissue plasminogen activator (tPA) — A substance that is sometimes given to patients withinthree hours of a stroke to dissolve blood clots within the brain.
Gale Encyclopedia of Medicine. Copyright 2008 The Gale Group, Inc. All rights reserved. 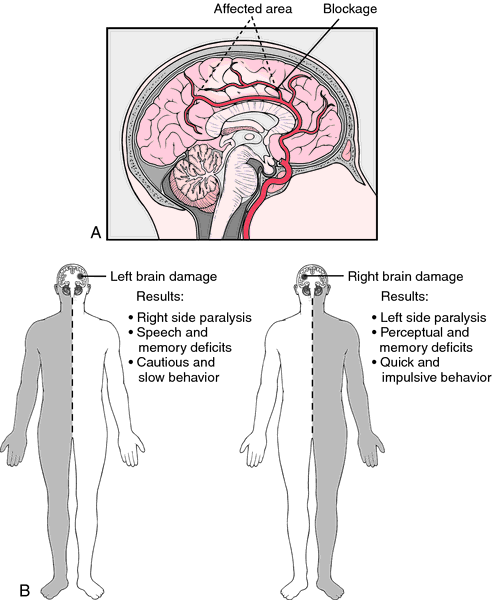 A, Stroke. B, Areas of the body affected by a stroke. From Frazier et al., 2000.
heat stroke a condition caused by exposure to excessive heat; see also sunstroke.
Miller-Keane Encyclopedia and Dictionary of Medicine, Nursing, and Allied Health, Seventh Edition. © 2003 by Saunders, an imprint of Elsevier, Inc. All rights reserved.