Microcephaly is a birth defect where a baby’s head is smaller than expected when compared to babies of the same sex and age. Babies with microcephaly often have smaller brains that might not have developed properly.

Microcephaly is a condition where a baby’s head is much smaller than expected. During pregnancy, a baby’s head grows because the baby’s brain grows. Microcephaly can occur because a baby’s brain has not developed properly during pregnancy or has stopped growing after birth, which results in a smaller head size. Microcephaly can be an isolated condition, meaning that it can occur with no other major birth defects, or it can occur in combination with other major birth defects.

What is severe microcephaly?

Babies with microcephaly can have a range of other problems, depending on how severe their microcephaly is. Microcephaly has been linked with the following problems:

Microcephaly can be diagnosed during pregnancy or after the baby is born.

After the Baby is Born

To diagnose microcephaly after birth, a healthcare provider will measure the distance around a newborn baby’s head, also called the head circumference, during a physical exam. The provider then compares this measurement to population standards by sex and age. Microcephaly is defined as a head circumference measurement that is smaller than a certain value for babies of the same age and sex. This measurement value for microcephaly is usually less than 2 standard deviations (SDs) below the average. The measurement value also may be designated as less than the 3rd percentile. This means the baby’s head is extremely small compared to babies of the same age and sex.

Often, healthcare providers should take the head circumference measurement when the newborn baby is at least 24 hours old. This helps make sure that compression due to delivery through the birth canal has resolved. If the healthcare provider suspects the baby has microcephaly, he or she can request one or more tests to help confirm the diagnosis. For example, special tests like a CT scan or an MRI  can provide critical information on the structure of the baby’s brain that can help determine if the newborn baby had an infection during pregnancy. They also can help the healthcare provider look for other problems that might be present.

Microcephaly is a medical condition in which the brain does not develop properly resulting in a smaller than normal head.[1] Microcephaly may be present at birth or it may develop in the first few years of life.[1] Often people with the disorder have an intellectual disability, poor motor function, poor speech, abnormal facial features, seizures, and dwarfism.[1]

The disorder may stem from a wide variety of conditions that cause abnormal growth of the brain, or from syndromes associated with chromosomal abnormalities. A homozygous mutationin one of the microcephalin genes causes primary microcephaly.[2] [3] It serves as an importantneurological indication or warning sign, but no uniformity exists in its definition. It is usually defined as a head circumference (HC) more than two standard deviations below the mean for age and sex.[4][5] Some academics advocate defining it as head circumference more than three standard deviations below the mean for the age and sex.[6]

There is no specific treatment that returns the head size to normal.[1] In general, life expectancy for individuals with microcephaly is reduced and the prognosis for normal brain function is poor. Occasionally some will grow normally and develop normal intelligence.[1]

Affected newborns generally have striking neurological defects and seizures. Severely impaired intellectual development is common, but disturbances in motor functions may not appear until later in life.[citation needed]

Infants with microcephaly are born with either a normal or reduced head size. Subsequently, the head fails to grow, while the face continues to develop at a normal rate, producing a child with a small head and a receding forehead, and a loose, often wrinkled scalp. As the child grows older, the smallness of the skull becomes more obvious, although the entire body also is often underweight and dwarfed. Development of motor functions and speech may be delayed. Hyperactivity and intellectual disability are common occurrences, although the degree of each varies. Convulsions may also occur. Motor ability varies, ranging from clumsiness in some to spastic quadriplegia in others.[citation needed]

Microcephaly is a type of cephalic disorder. It has been classified in two types based on the onset:[7]

Microcephaly (my-kroh-SEF-uh-lee) is a rare neurological condition in which an infant's head is significantly smaller than the heads of other children of the same age and sex. Sometimes detected at birth, microcephaly usually is the result of the brain developing abnormally in the womb or not growing as it should after birth.

Microcephaly can be caused by a variety of genetic and environmental factors. Children with microcephaly often have developmental issues. Generally there's no treatment for microcephaly, but early intervention with supportive therapies, such as speech and occupational therapies, may help enhance your child's development and improve quality of life.

Head size is measured as the distance around the top of the child's head (circumference). Using standardized growth charts, the measurement is compared with other children's measurements in percentiles. 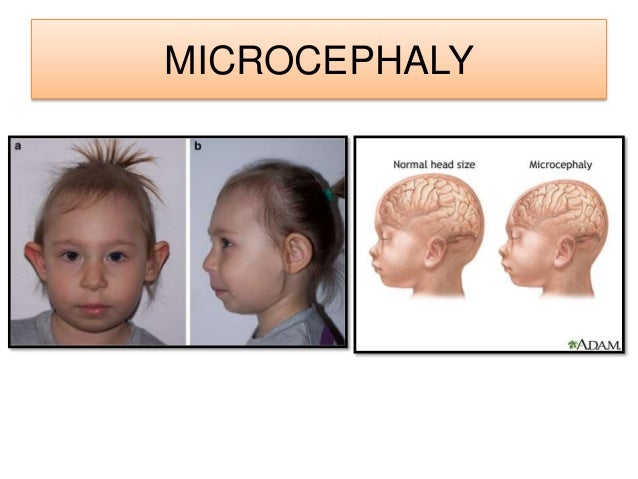 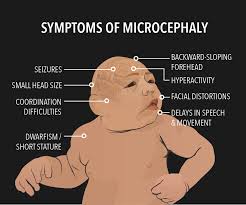 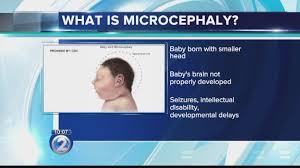 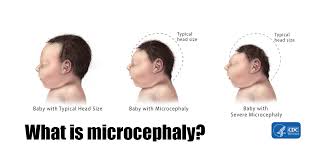 Microcephaly is a lifelong condition. There is no known cure or standard treatment for microcephaly. Because microcephaly can range from mild to severe, treatment options can range as well. Babies with mild microcephaly often don’t experience any other problems besides small head size. These babies will need routine check-ups to monitor their growth and development.

For more severe microcephaly, babies will need care and treatment focused on managing their other health problems (mentioned above). Developmental services early in life will often help babies with microcephaly to improve and maximize their physical and intellectual abilities. These services, known as early intervention, can include speech, occupational, and physical therapies. Sometimes medications also are needed to treat seizures or other symptoms.